There was huge excitement in the air when Botanic 1sts won the division 5/6 league on Saturday, 18th February with a 2-0 win against Rathgar away in High School in Rathgar.

The team have won the division with four league games still yet to play. It’s been a very successful season; they’ve only let in three goals all season and only lost one game. They are also one of the first teams in Leinster to win the league at this stage of the season.

Huge well done to the team, coaches and all the supporters! Lots to celebrate at the end of this season! 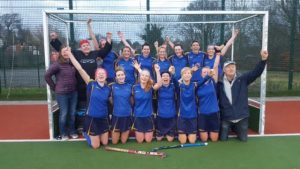