Botanic 2nds get promoted with one game to go

On Saturday 8th March, the 2nds team officially got promoted from division 8 after beating Swords 4-0 in a sunny morning match out in Alsaa. It has been a great season for this team and they have only narrowly missed out on winning the league to Bray. Congratulations to all the girls and their coaches on their great success this season!

The 2nds are undefeated in division 8 to date and are also the team in the league (and possibly Leinster?!) with the best defensive record. Only 3 goals have been let go passed the keeper all season. In any other year, this would win you a league, but it has been a close contest all season with Bray and congratulations has to go to them for their success and for keeping the competition going all season.

It’s no easy thing to do to get promoted from a league and the 2nds and their coaches, Gill and Karen have been working hard all year to see it through and are delighted to have been rewarded in the end.

One match left to go though! The team plays Three Rock Ladies on Saturday 22nd March at home. The team and their coaches will be hoping for another win and another clean sheet to round off the season. Then next season, it’s on to division 7. 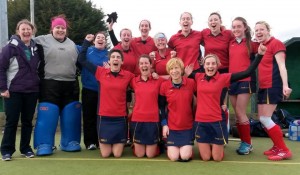