Botanic played Union College Hockey from New York on Tuesday 13th August in a challenge match. It was a lovely evening for a pre-season match and to welcome the visitors. Before the match both teams exchanged presents and took some photos to mark the event. The match started off well for the home side with lots of goal chances. It was a close game of hockey with end to end play. There was lots of clever passing and movement from both teams. Later in the first half, Union scored a goal from a short corner. At half time, the oranges were served to both teams and tactics were discussed.

The second half kicked off with more missed goal chances from Botanic. Down the other end, one of the Botanic defenders saved a ball off the line. It was a good second half with both teams playing well and showing off their hockey skills. The match in the end finished 1-0 to Union Hockey. No one was particularly unhappy with the result as it was a good display of hockey and a friendly game. And the supporters who came down to cheer every one on enjoyed the spectacle. It was a great way to get back into the hockey fitness. After the match, everyone retired to the pavilion for some tea and biscuits and the girls passed on some vital tips to the visiting Americans on what to see and do in Dublin while they are over. 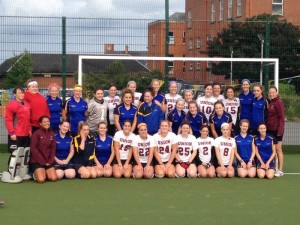 Photo of both teams before the match.

More photos can be seen in the Gallery section of our website: http://botanichockeyclub.com/gallery/botanic-v-union-college-aug-2013/

First club fundraiser of the season