Botanic Under 16s head out Wesht to play some hockey

The two under 16 squads from the club took a trip to Greenfields Hockey Club in Galway on Saturday 12th April for the weekend. A great weekend of hockey was had by all who went down. A true Galway welcome was laid on by Catherine Moore from Greenfields and her participating team.

From Botanic, the three under 16s junior coaches, Anne Dermody, Ronnie Stacey and Nora Lee brought the two squads down to the west for the weekend. Parents Kathryn Deignan, Orla Kelly and Una McTiernan were on hand to help out too.

First on the pitch at the NUI complex in Galway was Nora’s squad with subs from Anne’s team. The team were outstanding and against the run of play clocked up two goals . A stunned Greenfields threw everything at the team in the second half and pulled back two but Botanic held on for a draw in the end.

Anne’s squad were up next and Greenfields had a super team with top class talent, quickly peppering the Botanic goal. Greenfields went one up but Botanic grabbed a great goal back. However, Greenfields pulled ahead and hung on to a well earned 2- 1 victory. After all of the matches, Greenfields HC laid on a great spread and packed up goodie bags for the girls for the hostel.

That evening, the teams and parents went for a lovely meal out in Galway and then back to the hostel for the Easter bunny challenge – each of the four girls rooms set out to bedeck their group in Easter bunny costumes. The results were outstanding! Extraordinary creative talents exist alongside great hockey skills.

Day two of this hockey weekend saw retail therapy extreme. Followed by a windy walk in Salthill and a fine pizza lunch sponsored by the club.

Five cars full of tired but happy people returned to Botanic on the Sunday. A first Junior overnight trip ended where it started. MaryEsther English, the Junior Coordinator can be proud of a fantastic season and the future definitely looks bright for Botanic. 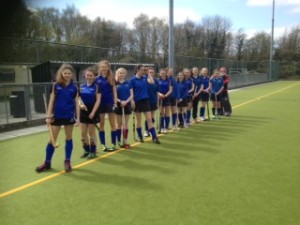 More photos from the trip are located here:

Celebrations to mark the end of the season