Celebrations to mark the end of the season

Botanic had it’s annual weekend away to mark the end of the season on 10th of May in Mount Wolesley Hotel in Tullow, Carlow. There was a relatively good turn out from club members to celebrate the successes and hard work throughout this season.

On the Saturday night, there was a three course meal in the hotel. Following the meal, there were some awards to be given out by the Club Captain, Philo Gallagher. Philo also thanked and made presentations to all of the hard-working volunteers who helped out throughout the season.

Congratulations to the award winners on the night:

Club Person of the Year (as voted by all of the members):

Mary Esther English, for all her hard work in organising the Juniors.

Club Person (as voted by the Committee members):

Nora Lee, for all her hard work in all areas throughout the season and over the years

Top Goal Scorer of the Year:

Aoife Nolan from the 1sts team with 12 goals 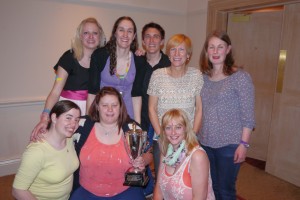 Botanic Under 16s head out Wesht to play some hockey

Volunteer in a role next season