The season isn’t over yet for Botanic’s 1sts and 4ths. Both teams are in cup finals in April. First up is the 4ths squad who play Bray in the division 11/12 Leinster cup final on 5th April at 12pm in Three Rock Rovers, Grange road.

Best of luck to both teams! Here’s hoping some silverware will be brought back to Glasnevin! 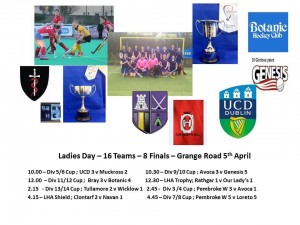