Botanic 1sts played Clonakilty on Saturday 12th April in the Irish Hockey Challenge Final out in UCD. It had to go to sudden death of penalty flicks, where Clonakilty ultimately triumphed (5-4).

It was an exciting game of hockey which finished 1-1 at full time. The first half was an evenly matched affair but Clonakilty dominated more in the second half and put a lot of pressure on Botanic . On to extra time and Botanic came out firing, determined to win the game in silver goal. They piled on the pressure on the Clonakility defence and were unlucky not to have been awarded, not one but two goals. Twice in quick succession, Aoife Nolan and Maeve Madigan put a ball into the back of the Clonakilty goal but both times their efforts were ruled out as the referee blew for penalty corners. Extra time finished at 1-1 and it was strokes that would ultimately decide the winner. Clonakilty prevailed in the end and got the trophy. Congratulations to them on their victory.

A big congratulations also has to go to our own, Gillian McAuliffe who was awarded ‘woman of the match’ for her fantastic defensive display throughout the game. And well done to the whole team and their coach, Ciaran for their hard work and efforts all season. 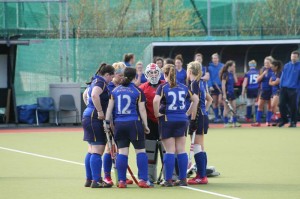 More photos from the match are located here:

Another report of the match can be found on The Hook Blog:

1sts take on Clonakilty this Saturday in the IHC Final!